Lee Cave-Berry, welcome to BassGirls.Com – Where are you based? Cambridge, UK.

At what age did you first take a bass in your hands? About 15 I think I bought my bass in the summer of 1973.

What attracted you to playing bass? I worked it out quite carefully. It was a toss-up between bass and drums because I knew that’s what I danced to the most. I eventually decided because of a track by Alice Cooper called “Halo of Flies” because there’s a place in that where the bass holds the rhythm and the drums solo over it. I also loved that it was melodic… I’m going to see Alice for the first time in November.. looking forward to it!

Did you play any other instrument before you started playing bass? I dabbled with a bit of acoustic guitar. Actually I asked for one for passing my 11+, but unfortunately my folks got me one with an unplayable action (of course I only found that out later .. at the time I thought it was just me). I played recorder at school and had a few piano lessons that I hated!

Can you remember the first piece you ever learned on bass? Oh yes .. Pink Floyd’s Money .. couldn’t have chosen anything in boring old 4/4 could I ?

What was your very first band? It was with a couple of guys at a local school .. Mick and Steve. I think we did a couple of rehearsals and a wedding anniversary. A friend of theirs introduced me to a proper gigging musician (Bob Nicholas)

What other bands were you a member of? Oh gosh .. if I leave any out .. sorry …Bill Hooker and the Stevedores ; Dick, Dick and the Cockettes; Blotto; The Mal Gray Band (toured supporting Fats Domino); Lizard (Ipswich); The Outpatients (Colchester); The Legionaires (Ipswich); Dr Skull and the Crossbones; Magnum Force; The Rapiers; Adventure Playground; Lightening Strikes (Wales); The Big Kick (York); 3’s a Crowd (Gibraltar); White Trash (Gibraltar). 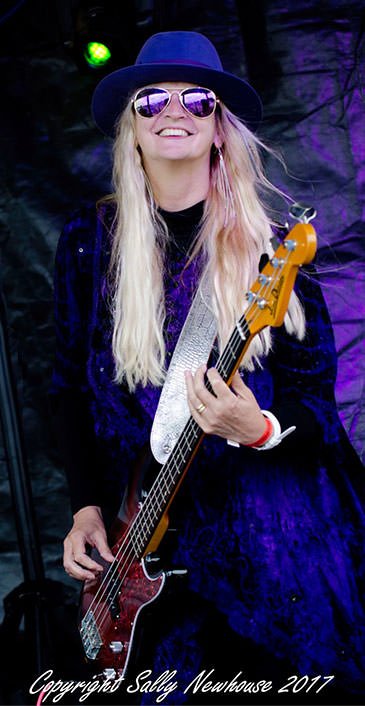 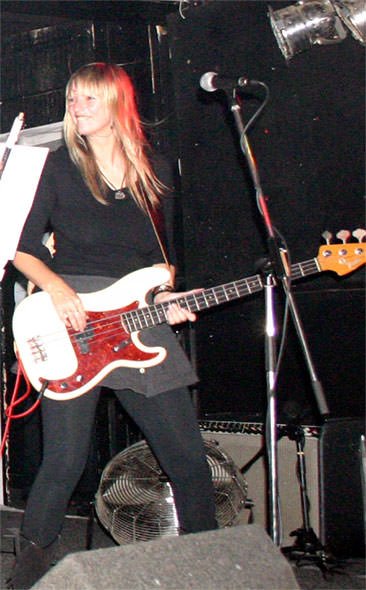 What’s your main bass? Burns (Baldwin) Baby Bison made in the 1960’s which I bought second-hand in 1973 for £60 and now has a gorgeous Gibson pickup donated and fitted by Guitar Man Pete Towers. (It’s a beauty – Ed.)

Do you think that the wood effects the tone/sound/sustain of your bass? Most definitely.. I’ve just bought a new Ibanez and have to use a graphic EQ to make it sound how I think a bass should. Trouble is.. weight!

Have you a preference for active or passive electronics? I’ll let you know when I’ve had my Ibanez a bit longer..

What strings to you like best? Well for my Burns I use Rotosound usually .. only they’ve been messing about with the length of the lower E string and its beginning to annoy me.

How often would you change your strings? I change them when they go dk!

What is your backline bass amp setup? No-one can accuse me of being fickle when it comes to gear.. I use a 60 watt H|H bass baby combo that Mark Noel-Johnson suggested to me in 1982.. with wheels on! I have bought a second one that I use with it for the larger venues (with no massive PA).

Fingers, plectrum or both? Totally crap with a plectrum (don’t think I got the wrist action in when I was a teenager .. probably why I use my fingers!)

Have you played double (upright) or acoustic bass? Once … totally different beastie … LOVE the sound.. totally impractical for a Lee!

What type of music do you play? Rock, Rock and Roll, Pop, Brit pop, Blues.

Have you recorded/released any CDs? Recorded a CD called Spring Forward with 16 of my own tracks on.. released independently and you can buy it at cdbaby.com or nightcafe.co.uk. Recorded a CD with 6 of my own songs on with Jaimie Chiappe as 3’s a Crowd. Another 5 songs I recorded on acoustic guitar in Gibraltar.I sang backing vocals on all 3 of Kimberley Rew’s last solo albums and played bass on the last two. Have just released a limited edition of ’50s duets with Kim. About to release a limited edition of a live Jack gig.

What was your best gig/venue ever? Covering for Matthew Seligman at a Soft Boys gig in Paris in 2003.. playing THOSE songs with THOSE people…. sigh!

Were you ever on a TV show? I was in a local (Cambridge Red) TV show with Johnno and Andy Wright. I was also interviewed with Jaimie (3’s a Crowd) for Gibraltar TV .. although I’ve never seen this interview and suspect it maybe somewhat embarrassing..

Are we allowed to say…SEXY?!
Lee Cave-Berry at 17 strutting her stuff (and her high boots!) 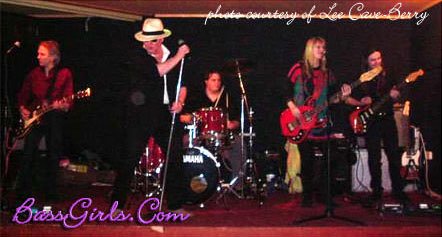 What was your worst moment onstage? Mal will laugh if he sees this, but in Essen in Germany the tour manager sent me out in front of 1000 people on my own – when I thought I was going to be part of a band! I think I kind of scuttled on with a half-wave .. plugged my bass guitar in .. turned round.. and there were the rest of the band in the wings killing themselves with laughter and the audience had big ??? over their heads.. apparently they’d arranged for a spotlight to follow me on too!!! I think I died a thousand deaths for about 3 months after!

What’s your favourite album/CD? Too many! Dark Side of the moon – Pink Floyd; Crime of the Century – Supertramp; Who’s Next – The Who; Led Zepellin II; Can of Bees – The Soft Boys; NextDoorLand – The Soft Boys; The Dead Students – Martin Newell; Rarer Gifts – The Lonely Tunnel Into Summer; Great Central and Essex Hideaway – Kimberley Rew.

Do you play/own any other instruments? I have two acoustic guitars (home/live), two basses, and one electric 6 string. I also have a plethora of percussion, and a midi keyboard that I haven’t used yet!

What other instrument would you most like to play? At the moment I’d like to be able to be good at lead guitar but really I’m most happy as a bass player.

Do you/have you played fretless bass? How does it compare with fretted for you? Yes I did play fretless in a band once. Line up was guitar, bass, sax, drums and a vocalist. Unfortunately the saxophonist and the guitarist found it really difficult to tune to one another (I knew they were out of tune with each other because I had to pitch to them!).. and even more annoying .. they blamed ME ‘cos I was playing fretless. Eventually I gave up on the fretless so that I could stay out of the tuning battles.. “donk donk donk donk .. there.. I’M in tune .. sort yourselves out! It’s absolutely awesome in slow songs with a bit of chorus .. otherwise it’s much the same. 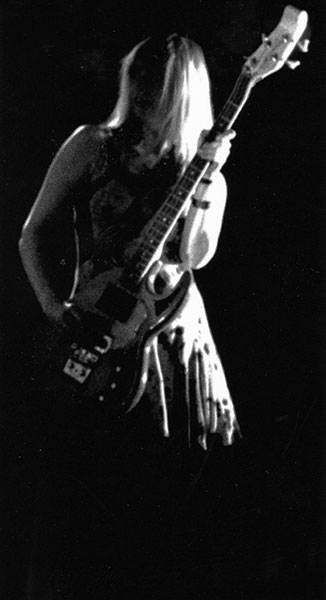 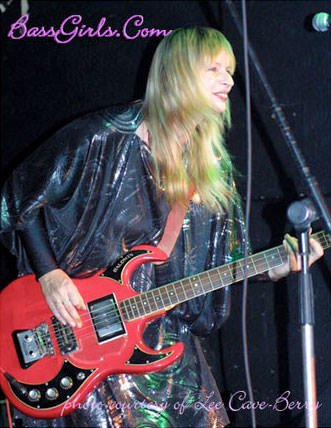 What are your interests/hobbies outside of music? Is there an outside??? Er computing, reading, movies, walking with Kim.

What musician(s) or singer(s) would you like to share the stage with? Status Quo, Robyn Hitchcock Kimberley Rew and Morris Windsor, Jack

Do you have any ‘bassist jokes’ to share? No .. I collect drummer ones .. my favourite.. What’s the difference between a drummer and a kaleidoscope? … It doesn’t matter how hard you shake him.. you’ll never get a pattern out of a drummer… it still makes me laugh!

What was the best concert you were ever at? Tooo difficult .. I LOVED watching the Soft Boys.. I was knocked out by Status Quo and Chuck Berry. I loved Dr Feelgood, The Pirates and Albert Lee. Pink Floyd in Bristol in the 1970’s .. I floated outa there..

Do you sing? Yes .. some songs are more difficult than others.

Have you ever performed onstage without your bass? Yes .. I’ve played rhythm guitar and keyboards (hated that.. can’t move!), tambourine and just sang!

Have you played outside your own country? Germany, Austria, Holland, Spain, Italy, Denmark, France.What’s your opinion on basses with more than 4 strings? Sorry ..can’t really see the need for them. Bit posey.

What do you feel is the bass-players function in a band? The Glue. The heart. The knitting between the drums (rhythm) and everything else (music).

Did you ever have a famous person in your audience? How about Alan Rickman? That count? (Sure does – a fine actor ~ Ed.).

What are your ambitions? I would love to have a large audience who’d all come to see ME play.. and think I’m great.. one can still dream … I have others too.

Many thanks for your time Lee.

Lee’s website can be accessed through our Links page – Ed.

Text and images are copyright of Lee Cave-Berry and BassGirls.Com