Kim & Lee will be premiering the first YouTube video from “Crunching the Catalogue” on Monday 22nd February 4pm UK time.

The concept for Crunching the Catalogue came as a response to the many requests and questions that Kimberley Rew and Lee Cave-Berry receive.  The idea is, you send us a request for one of our songs- we record a straight off the bat performance of it, in our Bat Cave (or spare room), and put it on YouTube, with a dedication, plus the answer to any hopefully relevant question you might have.

Don’t miss the first one of these intimate performances! Check out Crunching the Catalogue on Kimberley’s YouTube channel now!

All I Want Is You For Christmas

…and here’s the video:

Kimberley is best known for writing one of the greatest pop songs of all time, Walking On Sunshine. He also provided The Bangles with their second single, Going Down To Liverpool, and composed the UK’s last Eurovision winner, Love Shine A Light for his then band, Katrina & The Waves. For the past 20 odd years, Rew has been performing and recording with his wife Lee Cave-Berry, and they now present another instant classic, All I Want Is You For Christmas. Rew explains:-

“I rarely write on commission, preferring to wait, languidly, by a tinkling brook, or in a cloud of incense, for inspiration to strike, but this is a commission, being urged to write a Christmas song by Lee. I’ve always liked songs with nonsense syllables, sha la las, dooby doos etc, but decent quality nonsense is actually harder to write than stuff that makes sense.”

Originally released on their Strawberry Fair album from 2011, the track tips its hat to the glory days of Christmas No 1’s while radiating its own quirky energy. Kim and Lee have also made an accompanying Christmas cartoon which features Rew’s idiosyncratic drawings. The first frame pays tribute to keyboardist Ian Gibbons who played on many of their albums – Gibbons was also a member of The Kinks – while the final picture flags up the plight of Cambridge’s famous venue The Flying Pig – https://www.facebook.com/search/top?q=save%20the%20flying%20pig

Winter Time is another helping of seasonally appropriate fare, first heard on 2014’s The Next Big Adventure. With its beautifully warm aura and mulled string section it once again displays the wealth of Kim and Lee’s treasure trove of a back catalogue.

“The opposite of The Beach Boys’ trademark summer fun, etc. It advises reading a book but stops short of recommending a mug of cocoa. Featuring my Mellotron, which maybe I like more in principle than what I can actually make it sound like.”

The EP also looks forward with a pair of typically quirky new pop gems. First, the spacious, joyous Voyager – one of an elite cadre of songs celebrating space probes and extolling the virtues of “interstellar love”.

“I’ve always liked the idea of burying time capsules in the ground, or sending them into space, particularly when Voyager, launched in 1977, included Chuck Berry’s Johnny B Goode. Then you somewhat forget about these events, thanks to the huge stretches of time that space travel takes. Voyager is now heading for the Oort Cloud, which makes it the furthest travelled man-made object. And people still like Johnny B Goode in 2020.”

And finally, Silver Wedding, a beautiful paean to our creative couple’s love.

“This really is the only Silver Wedding song in the universe. The nearest I can find is the Anniversary Waltz, from the 1880s. So here we go, on the cutting edge as always!”

Kim and Lee will be releasing a new album in 2021 (the 40th anniversary of Kim’s first solo single!) to add to a cornucopia of wonderful music the pair of them have made over the years. In the meantime, let’s embrace the spirit of the season, and look to the future with hope and love.

Lee Cave-Berry and  songwriter husband Kimberley Rew, who wrote the UK’s winning song Love Shine A Light as he talks about Eurovision 2020 and the release of Sunshine Walkers, the new album from Kimberley and Lee Cave-Berry. 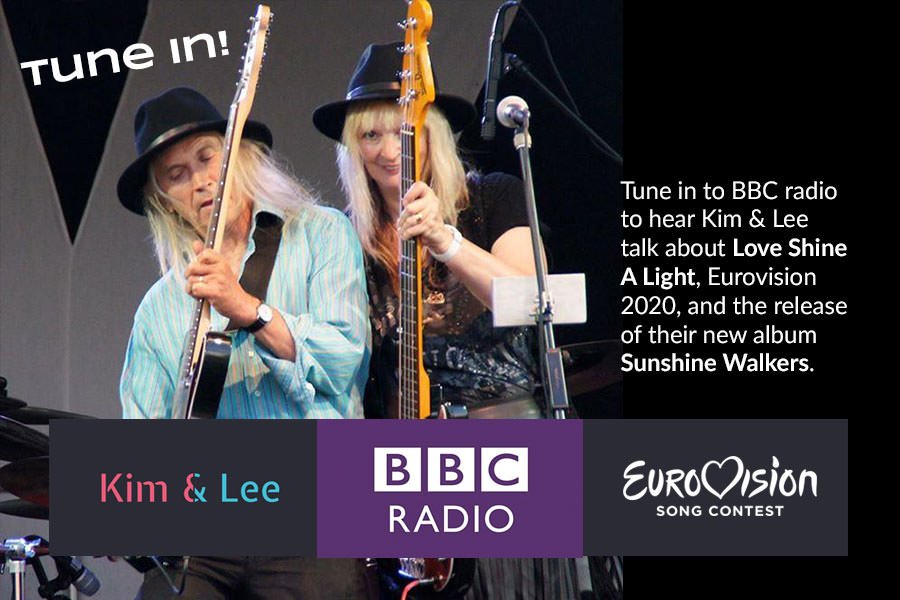 From Wednesday 13th to Saturday 16th May, Kim & Lee will be busy doing interviews. Don’t forget to tune in to one of the shows listed below.

Kim & Lee will be talking to:

Gig-l voted band of the year by Severn FM

After the fabulous DrWart Hoover played ‘Absolutely no idea” Severnfm.com we were nominated as band of the year. Guess what? We only won it!! Whoop! During the COVID-19 lockdown in the UK please assume gigs in the following booked events will unfortunately not be going ahead, but do look out for live video feeds from The Wednesday Session on Facebook.

Menu
We use cookies to ensure that we give you the best experience on our website. If you continue to use this site we will assume that you are happy with it.OkPrivacy policy